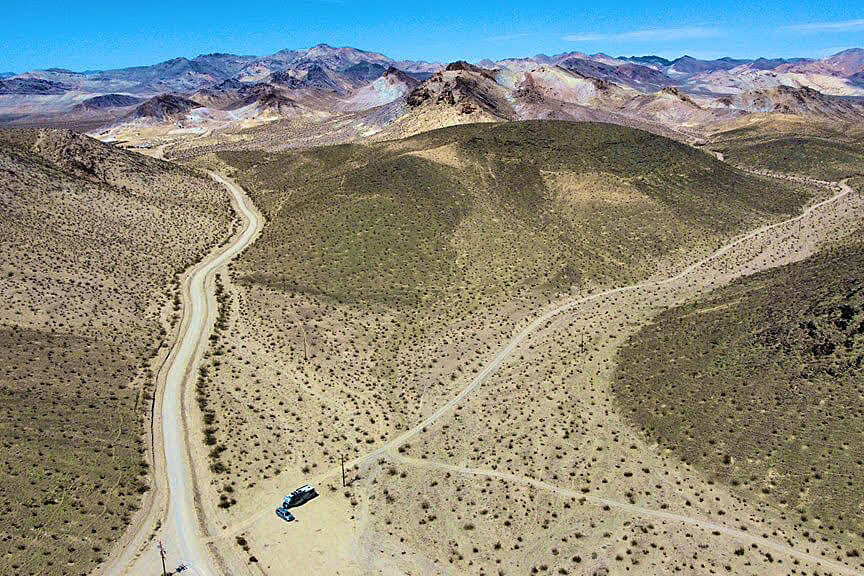 From the Barstow, CA area, we headed toward Beatty, NV. There's nothing very big or flashy here but there's some interesting history if you search!

One of the first things we did was to take the kids to a local brothel! Just kidding. Well, I mean, we did, but it's been closed since 2014! Angel's Ladies Brothel - right off of I95. There's nothing left except their sign ... and a plane! Apparently, in 1978, the owners of the brothel came up with an idea for a promotional stunt - parachute out of the plane and land on a mattress to win a night with the lady of your choice! During the event, strong winds, an inexperienced pilot, and, uh, some distractions, led to the plane crash landing! The owners of the brothel also owned the plane so they decided to leave it on their property - still attracting business! It's a quick and interesting spot to stop. 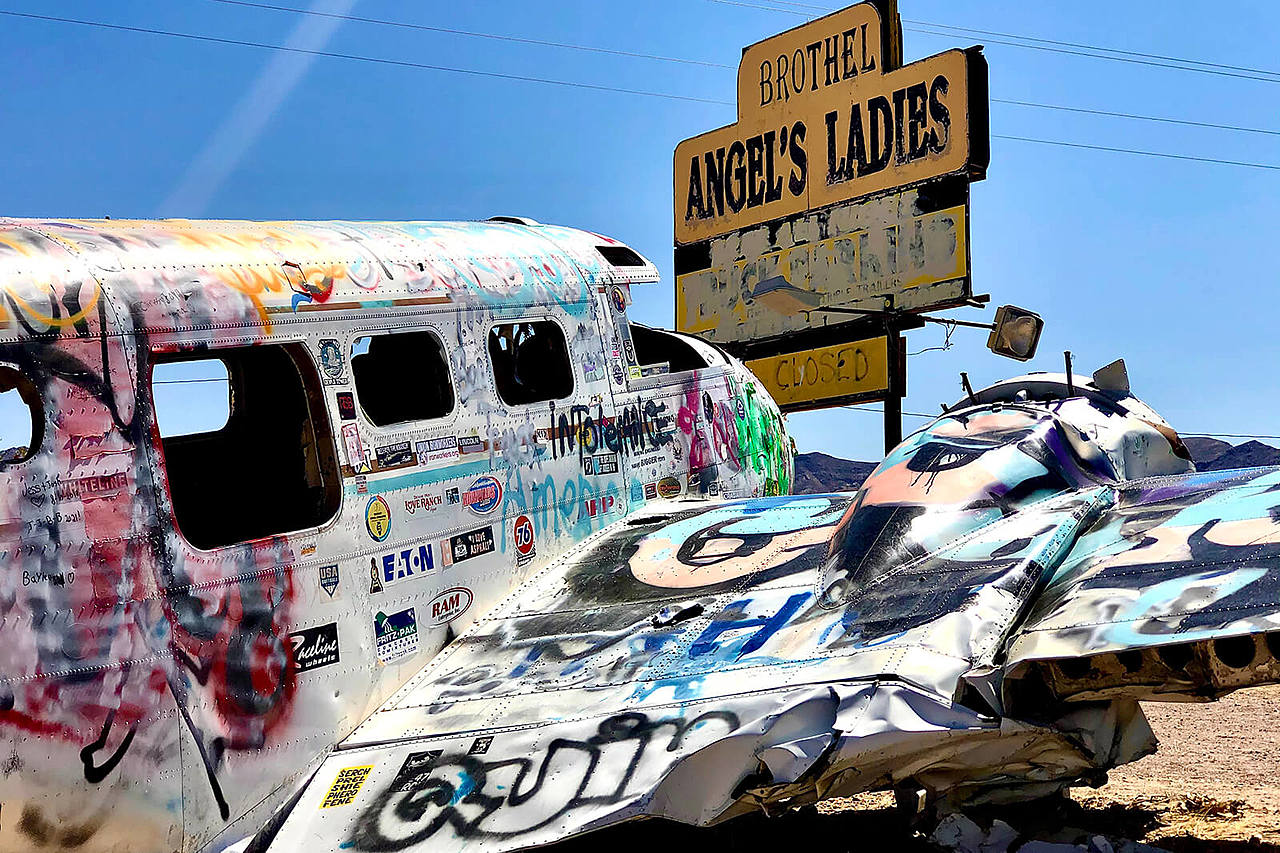 Not far from there is Rhyolite Ghost Town. This one you want to read about before you go. The history of this place is like no other! One of the most dramatic boom to bust stories in the history of the west. In the summer of 1905, Rhyolite was one of the grandest tent cities with an estimated 2000 residents.


- They had water piped into the city by July 1905.
- Significant rock and concrete buildings by the fall of 1906.
- A railroad by Dec 1906.
- Up to as many as 10,000 residents by late 1907 (reports vary on this)
- In 1907 the city had "electricity, concrete sidewalks, water mains, telephone lines, newspapers, banks, police and fire departments, a stock exchange, an opera house, a hospital, a school, and numerous other businesses." (westernmininghistory)
- By Feb 1908, there were signs of trouble in the mines.
- 1909 no new ore was being found and mines began to close.
- By 1910, the population dropped to approx 675 residents.
- The same year, all three banks in town closed.
- The newspaper shut down in the summer of 1912.
- The Post office closed in the fall of 1913.
- The last train left Rhyolite train station in July 1914.
- In 1916, the electric company shut down the plant and removed the lines.
- By 1916, the town was mostly abandoned.

Whew! What a whirlwind! When you visit, you can still see the remains of some of the concrete buildings. The train station is still intact but is fenced off. And you can hike up the hills to find some of the old mines! 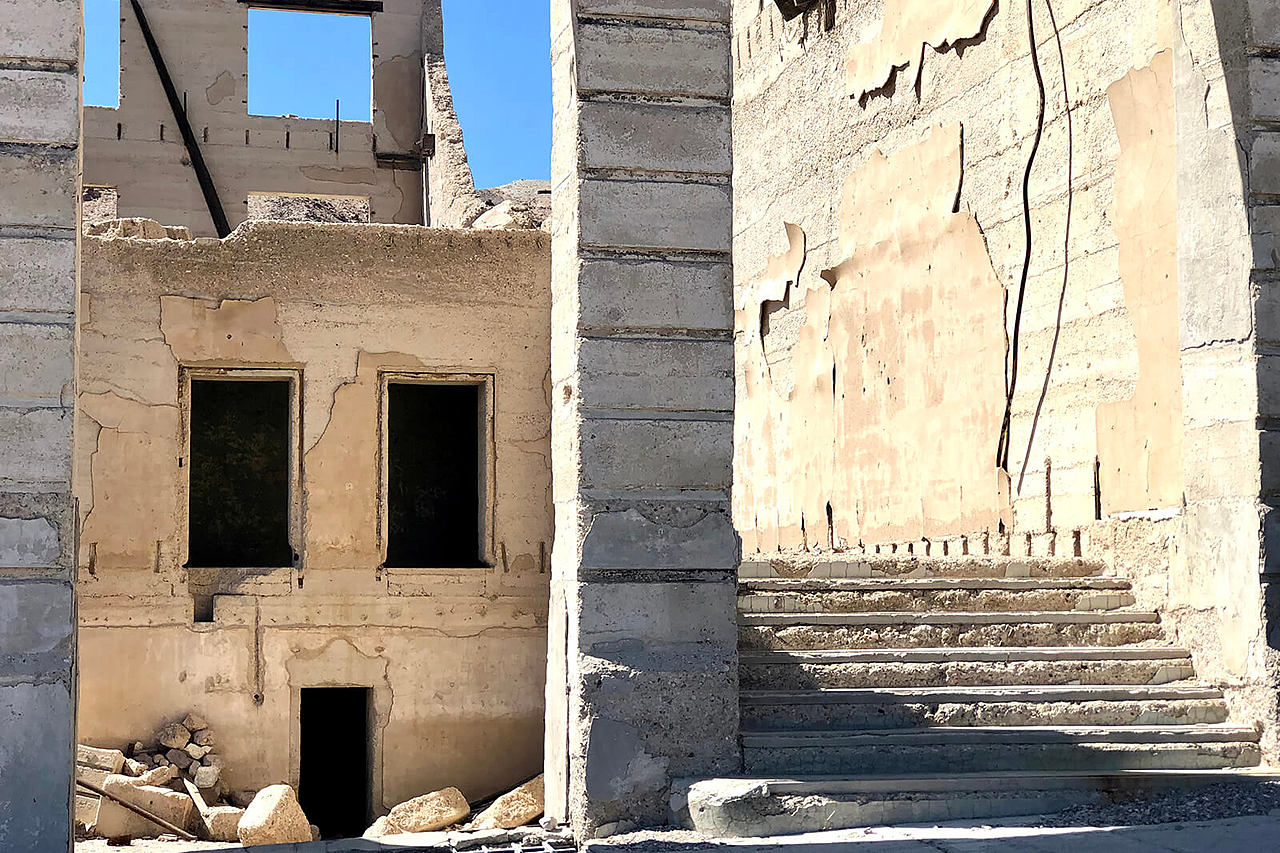 Down the road from the ghost town is Goldwell Open Air Museum. It's been around since the mid-80s. Some art installations are permanent - others are swapped out occasionally. It's kind of a hodgepodge of random art but a neat stop. 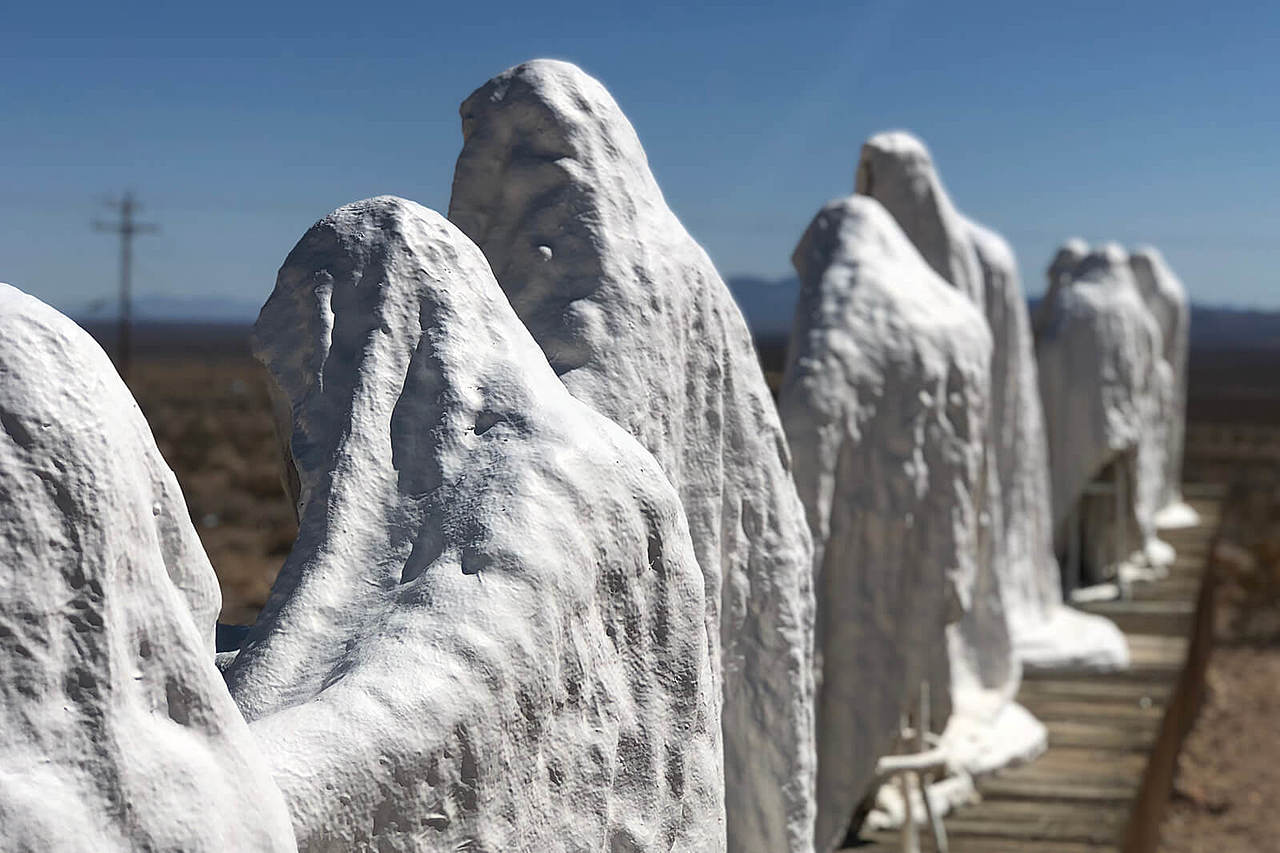 While we're in the Beatty area, let's please talk about the burros! There are burros that wander around the town. There were even a few that walked through the area where we boondocked. And they are NOT afraid of people! At our camp spot, one walked right up to the door of our RV. No doubt looking for snacks - but be aware, it is a no-no to feed wild burros! In town, we pulled into a parking lot to get a closer look at some of the burros there, and the next thing we knew, we had three of them with their heads in the window of the truck! That was an experience I never knew I needed in my life until it happened! 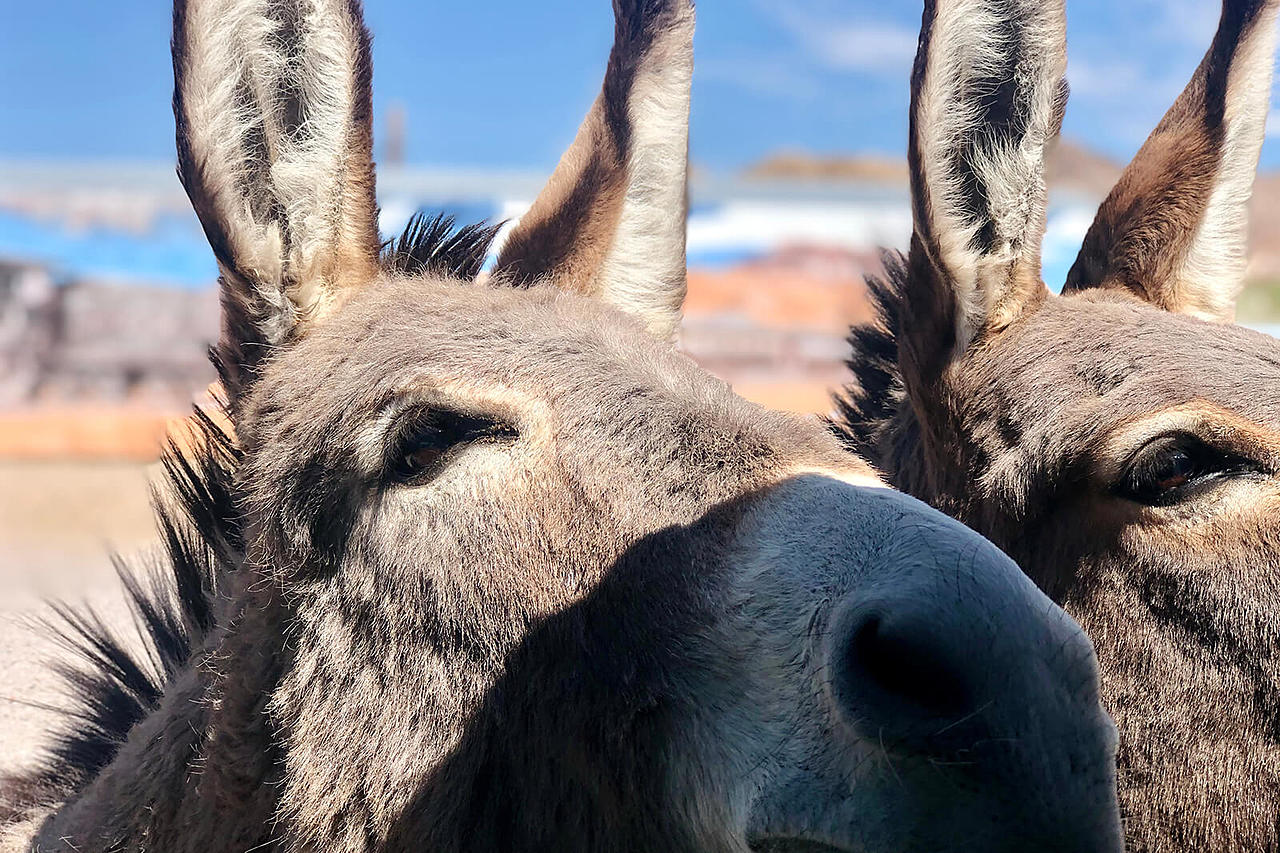 On our way out of Beatty, we made a couple of stops in the eccentric little town of Goldfield! The town is small and easy to drive through without giving it a second thought. But please slow down and look around! If you have the time, stop in and check out the International Car Forest. What started as one car, standing on its nose in the sand, expanded to over 40 vehicles. Some standing on their noses, others stacked on top of each other, all covered in bright graffiti. 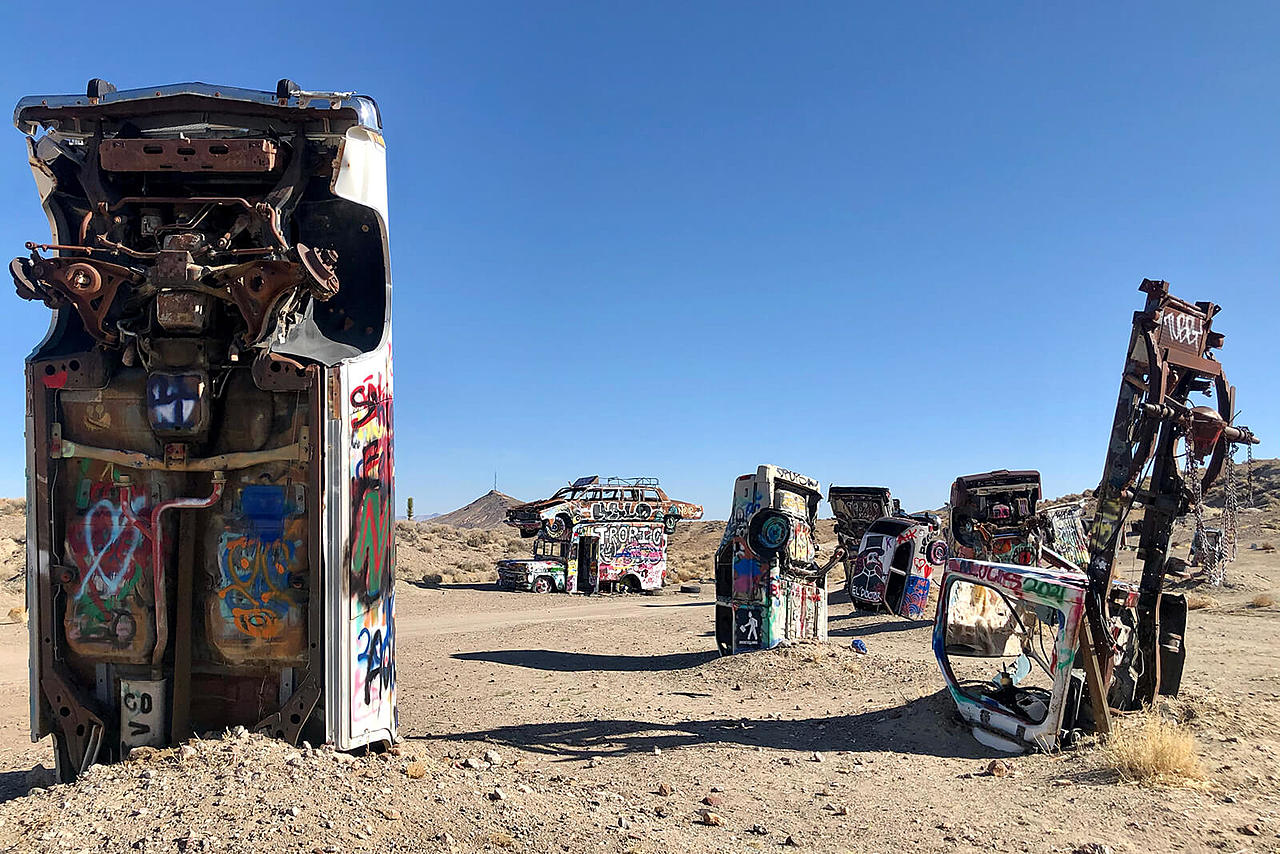 Right down the road, along I95, is the Goldfield Art Car Park Gallery. This spot is about as quirky as it gets! Do yourself a favor, and stop and explore. The more you look, the more you find. You might think it's just a pile of old cars and junk - and maybe it kind of is - but the intricate details, the time and attention put into this, just wow! 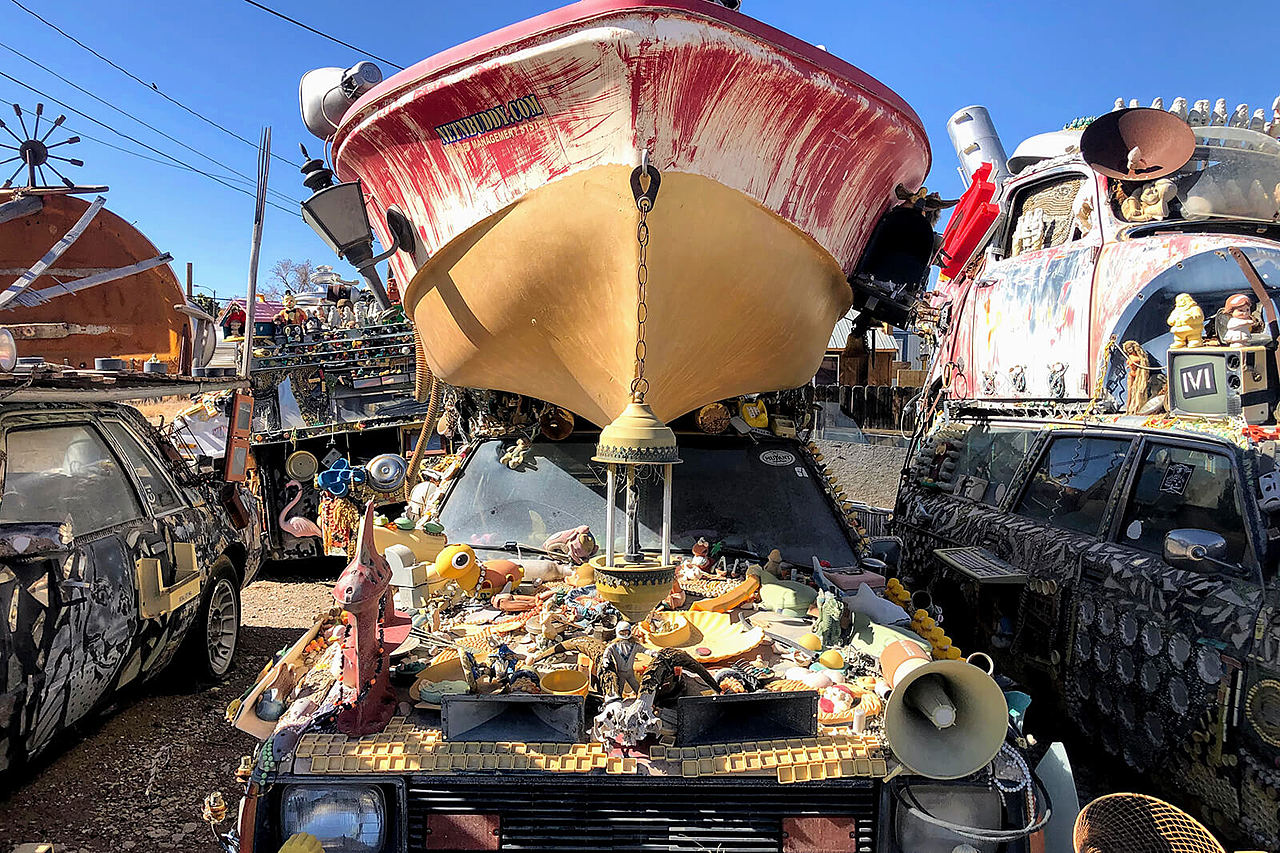 Now we're off to Lake Tahoe!