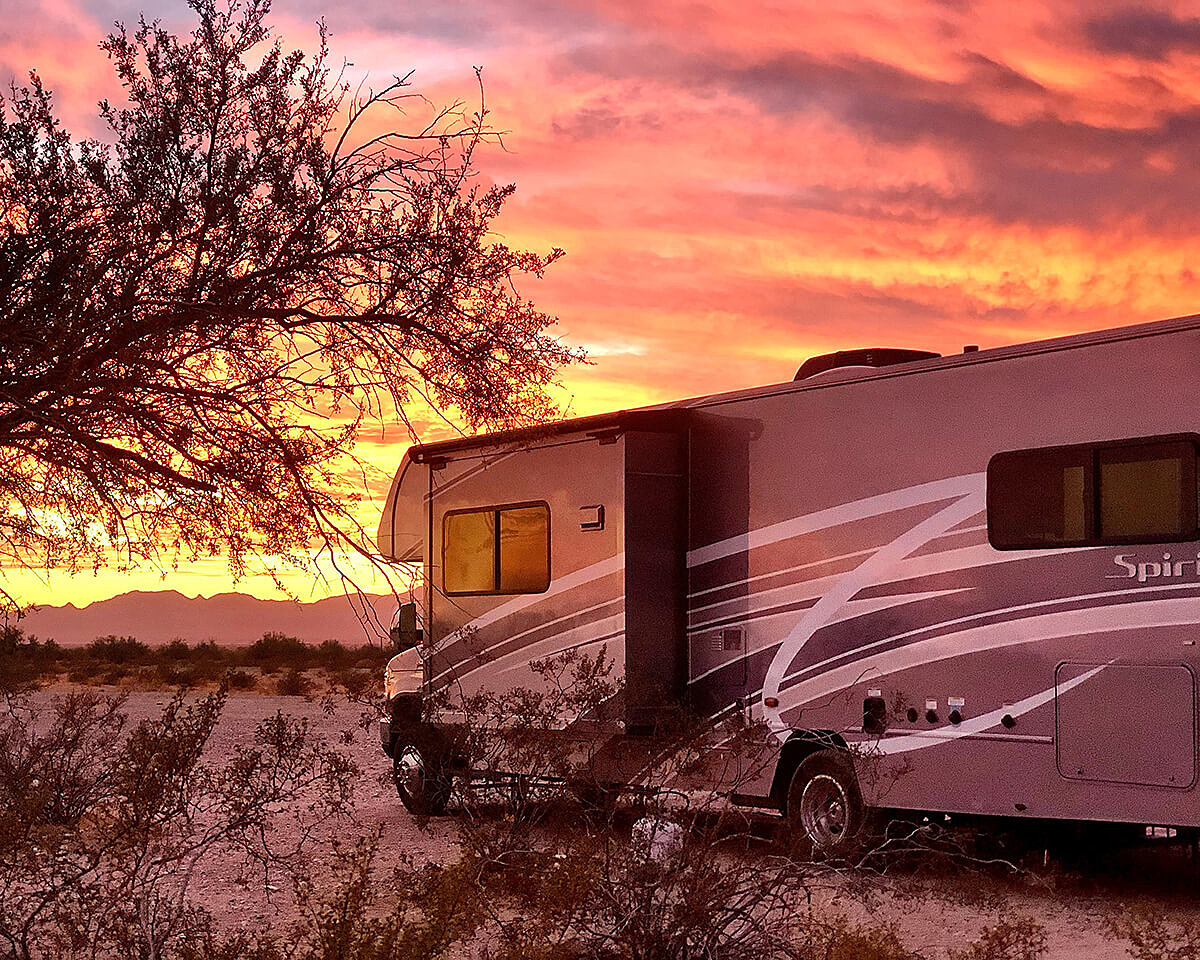 This was winter number 2 for us at this LTVA (Long Term Visitor Area) in Blythe, CA. Last year, we had only been on the road, full time, for about 6 months by the time we landed in Blythe for the winter. We were still new to RVing and we were ready for a break. Our focus that first winter was fixing up our old rig - a 24ft, 2015 Coachmen Leprechaun. Trying to give the inside a little facelift and making the tiny space as usable as possible.

This year was a little different. We had been on the road for a year and a half by the time we circled back to Blythe. A little more seasoned. And in a new, more appropriately sized rig! Our needs during this winter were different. We still had some little projects to do - decorating our new rig and making it our own being the main one. We weren't searching for rest. So we were really able to use this time to explore the area - which we hadn't done the year before.

To be honest, Blythe doesn't look like much. It's a little run down. You have basic stores (Albertson's, Rite Aid, ACE) but that's about it. The closest Walmart is almost an hour away. But we've seen old pictures of Blythe and it looks like it was a bustling little town! From what we can gather, things started to take a turn in 2008 with the market crash. Stores and residents started to leave town and they're having a hard time holding on to what's left. What is there is mostly farmland. Lots and lots of farmland. Alfalfa. Corn. Cotton. Sheep. And some really great restaurants! Two that we tried, and fell in love with this year, were Rebel BBQ and LaPaloma Mexican restaurant. So so so good!

Just outside of Blythe, and down the road from the LTVA, is Midland, CA. It's the bones of a town that existed from 1925 to 1960 (with the last residents moving out in '66/'67). It's so far out in the middle of nowhere that it's hard to imagine a town ever being there! The town was owned and operated by the US Gypsum Co. And at its peak, housed about 1000 residents. 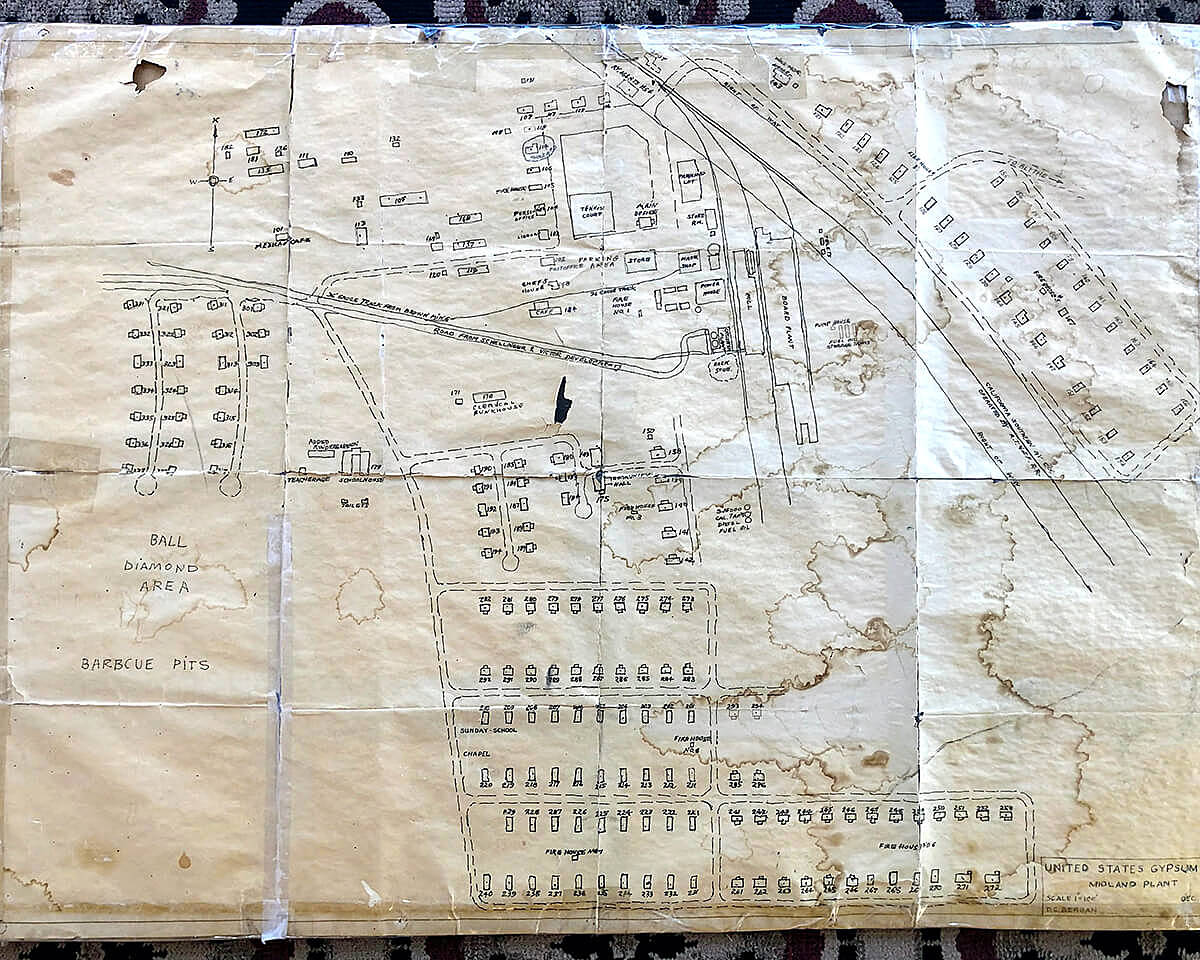 There was a school, 2 cafes, a store, a post office, basketball and tennis courts, a train depot, a huge gypsum and wallboard factory, and 198 homes! Their water was brought in daily via train from Blythe. What is left are the foundations of the buildings. The chimney stack from the school. And a house number plaque or 2. 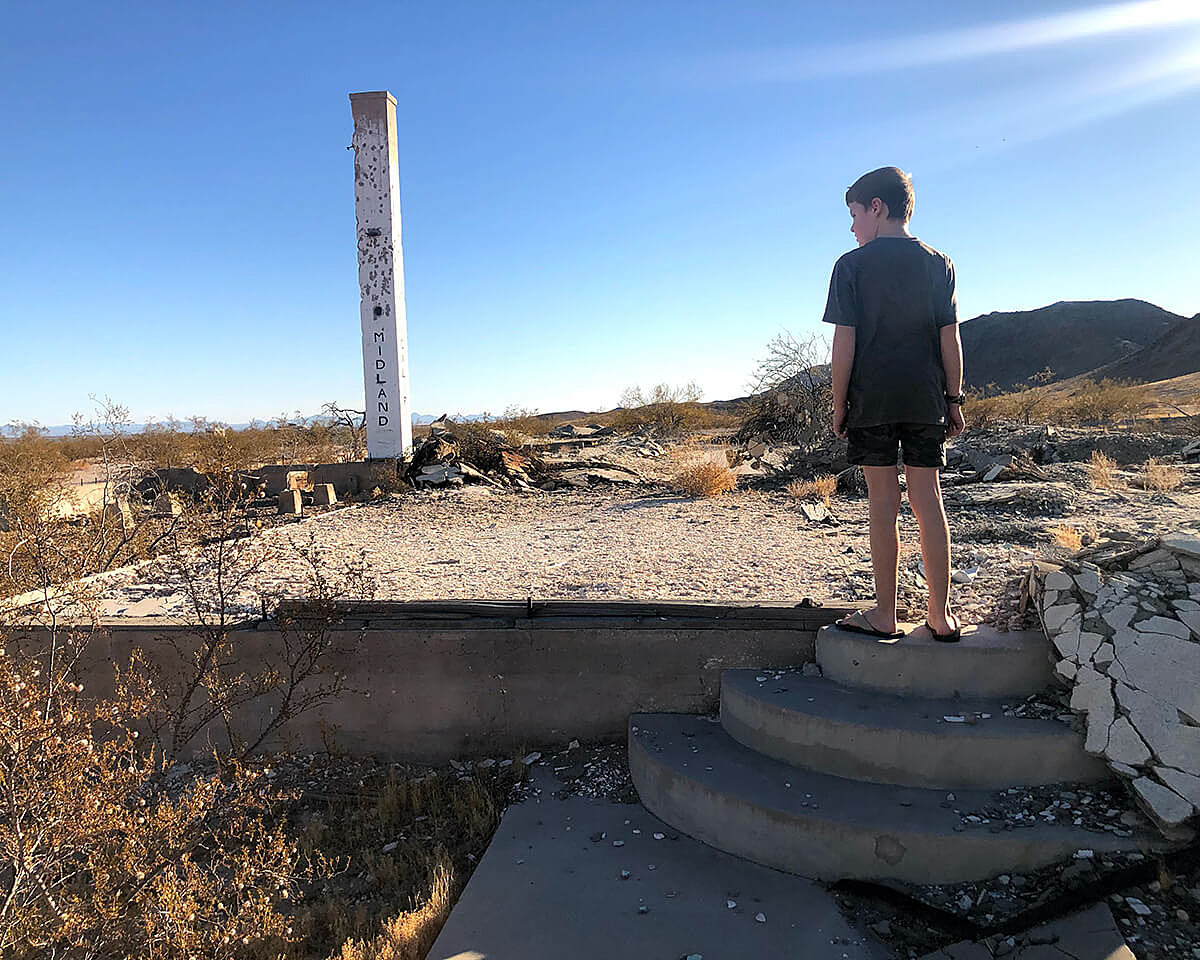 There is a trailer toward the entrance that a former resident lives in. She's kind of the keeper of the old town now. The town may be a "ghost town" but former residents don't see it that way. This place is very much alive to them. Full of fond memories of family and friends. They still have reunions every 2 years. We met the woman who lives in the trailer near the town entrance - actually, she pulled in front of our truck very quickly as we were driving into Midland to stop us and ask us what we were doing there! We told her we were curious about the town and she told us to check out the museum. I'm so glad she stopped us because it would have been very easy to dismiss this tiny blue and silver trailer with "MIDLAND MUSEUM" painted on the back of it. 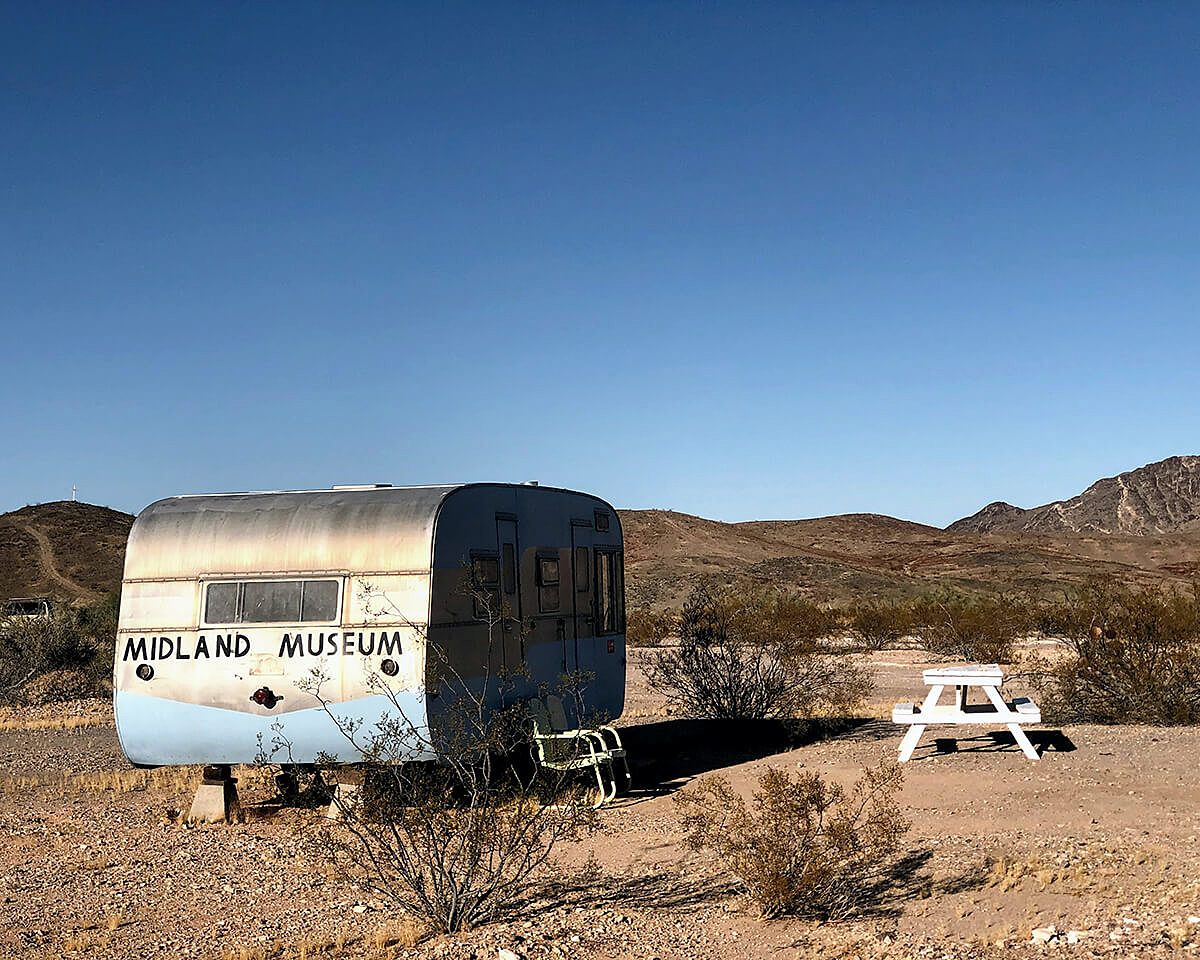 It is an absolute treasure. It was filled to the brim with the town's history. Newspaper clippings, handwritten notes from the son (and apparent town historian), a hand-drawn map of how the town was laid out, old photos - of families, kids on the school playground, men and equipment in the mines... All beautifully displayed and organized.

Also not far from the LTVA are the Blythe Intaglios or geoglyphs. There are 3 separate areas of these intaglios - 2 are easy to get to along the road with pull-offs for parking - the 3rd is a short hike from the road. The human figures are over 100 ft from head to toe. It's a little difficult to really grasp the scale of them from the ground, but if you have a drone, they are very impressive from above! 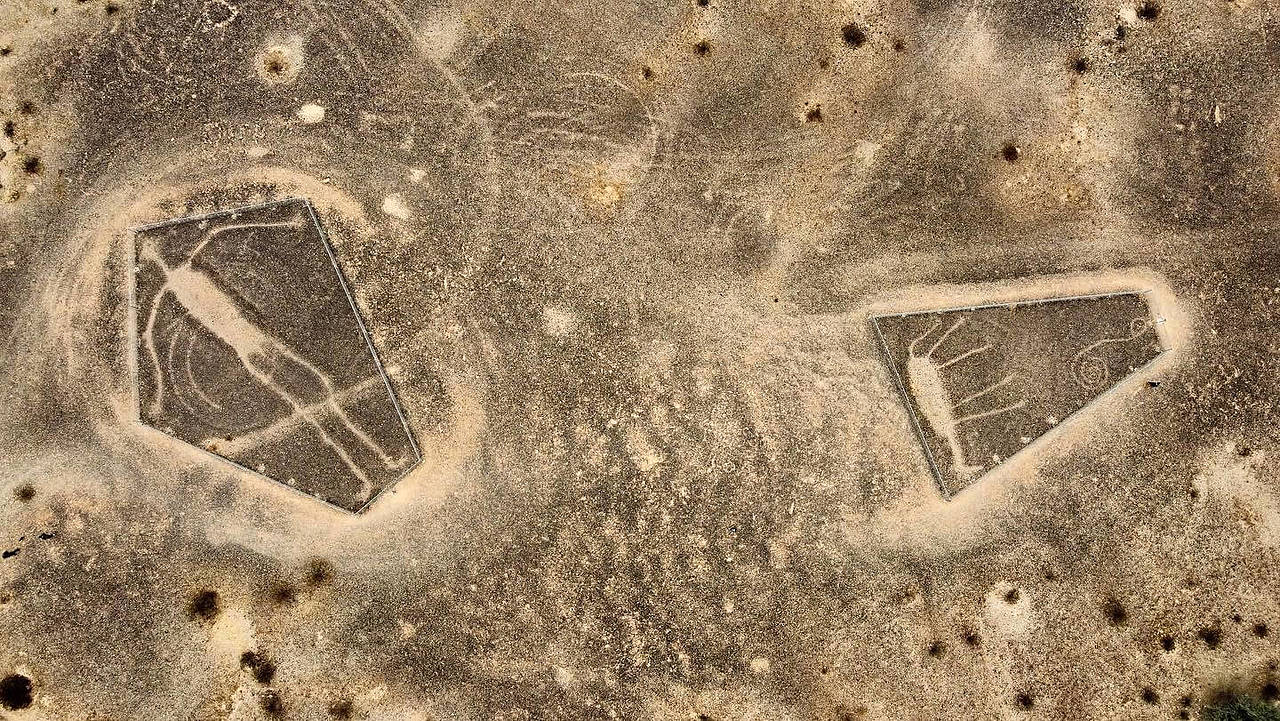 Quartzsite, AZ is just across the CA/AZ border. It's where the Quartzsite RV show is held every January. It brings in HUGE crowds annually! RVers as far as the eye can see. We went to the 2020 show but skipped it this year - because we don't do well with crowds and because Covid is still a concern.

So Blythe works for us. The LTVA is quiet. There aren't many people. We have easy access to all of our basic needs. And it's a great place to stop for a minute to regroup and recharge - and wait out some of the winter weather!

We do get bored easily though, so it's time to hit the road again. All the way across the border into Arizona! Let's go!